Based on the classic 1980s Teenage Mutant Ninja Turtles cartoon series! After being accidentally exposed to radioactive ooze, four ordinary household pets are transformed into a band of wisecracking, pizza-loving, villain-dicing adolescent reptiles!

Whether it’s facing fierce enemies or saving humanity from near extinction, with the guidance of their Sensei, these Heroes in a Half Shell are always ready for straight outta the sewer action!

The TMNT Cartoon line has seen an infestation of rodents! Enter the Rat King. Equipped with soda grenades, a mutagen canister with a removable cap, and a flute to control his rat army, he marches through the sewers of New York to bring an end to human rule. Also included in the 2 pack is Channel 6’s own cameraman, Vernon Fenwick. Standing approximately 7″ tall, Vernon comes with a Channel 6 camera and interchangeable hands and head to turn him into a Were-rat! 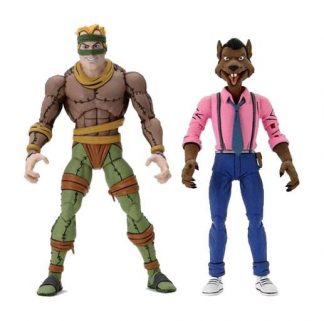