A KOTOBUKIYA Japanese import! Kotobukiya continues to bring fan-favorite heroes and villains to life with fun new interpretations in the Marvel Bishoujo Statue lineup. Following up after the silly Squirrel Girl is one of the most popular characters introduces in the last few years, the new MS. MARVEL! Introduced in the pages of Captain Marvel, young Pakistani-American Kamala Khan witnessed the heroism of Carol Danvers and when her own abilities manifested the girl took on the name Ms. Marvel. Kamala is an Inhuman with fantastic shapeshifting powers and always tries to do good, protecting the weak and working alongside veteran superheroes. Now this great new hero for a new age can be yours in a superb Bishoujo interpretation based on a new character interpretation and illustration by Shunya Yamashita!

Shy but powerful, Ms. Marvel is ready to make her name in a world of superheroes! She stands in a defensive pose, her knees bent slightly and legs apart for balance while she holds her hands in fists in front of her. Kamala wears her bold costume with a slim blue dress decorated with a yellow logo over a red shirt and tights, and accents all of that with tall blue boots, a golden bracer on her left forearm, and a voluminous red scarf around her neck that swirls into the air around her. The young hero also wears a blue domino mask to conceal her identity but it does little to hide her beauty and her big, marvelous eyes framed by her flowing black hair. Sculpted by Hogarii (Jetstream), Ms. Marvel stands 7 ½ inches tall (1/7 scale) kneeling on a specially designed display base. Add this great new Bishoujo heroine to your collection! 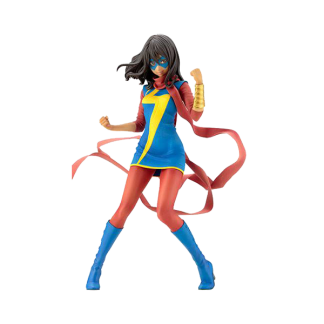